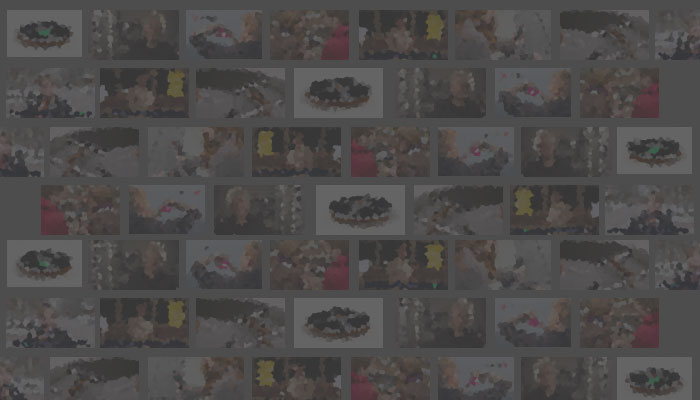 We asked 100 campaigns about their crowdfunding video to learn what works, what doesn't and how much to spend.

If we told you that you only needed to spend $1,000 on your crowdfunding video to get $1,000,000 in pledges, you might laugh with joy. And if we told you that you might spend $10,000 and only get $5,000 in pledges you might cry. Truth is, both these things happened to someone in 2016, and neither is the norm. We surveyed 100 recent hardware crowdfunding campaigns - join us as we look at how much they spent, what tone they set, who and what they featured, and what impact it all had.

Budget - How much should you spend on your video?

The average campaign spends real money on their video: ~$10k when looking at the mean, ~$5k median. This is enough to hire an experienced crew with quality equipment - an indication that Crowdfunding has professionalised over the years.

"You need to spend a lot for a crowdfunding campaign video .. It's the key!" Slick Stabilizer, $434k, 540% funded
"I settled for amateur. Because my budget didn't allow me to hire a professional."SmartPi Touch, $59k, 492% funded

But how do video budgets actually affect outcomes? Do fancy videos perform any better? Let's first look at the relationship between budget and amount raised. 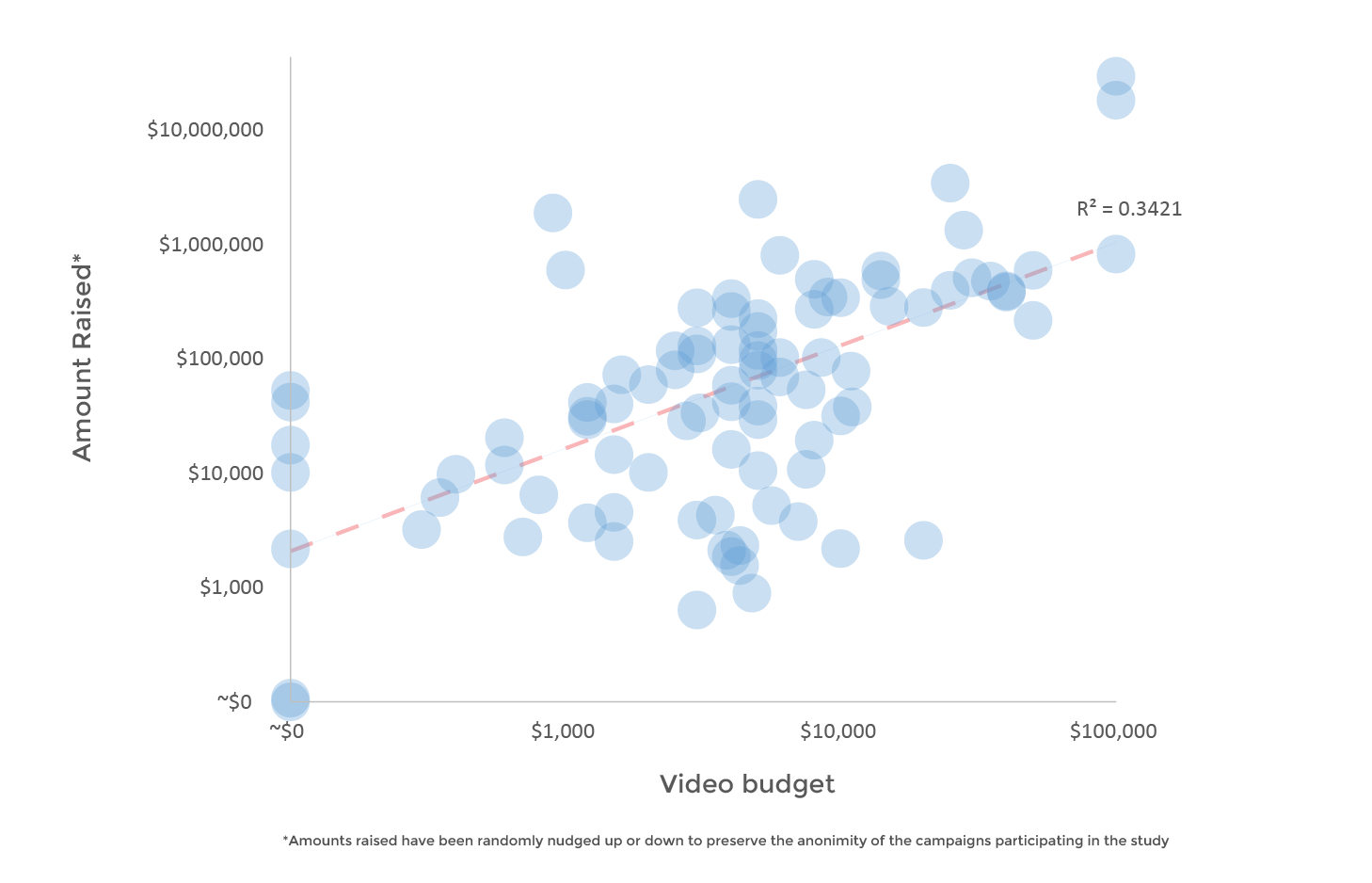 Looking at this chart it is tempting to focus just on the trendline and to conclude that "expensive videos raise more money". While this is true in aggregate, the reality is that there's a lot of variation around the trend (R2 = 34%, which is low). This data can help you benchmark against other campaigns, but it shouldn't be read as a prescription to spend. What's right for the average campaign may not be best for yours.

With that said, here is an aggregation of the data above, in case all those datapoints hurt your eyes: 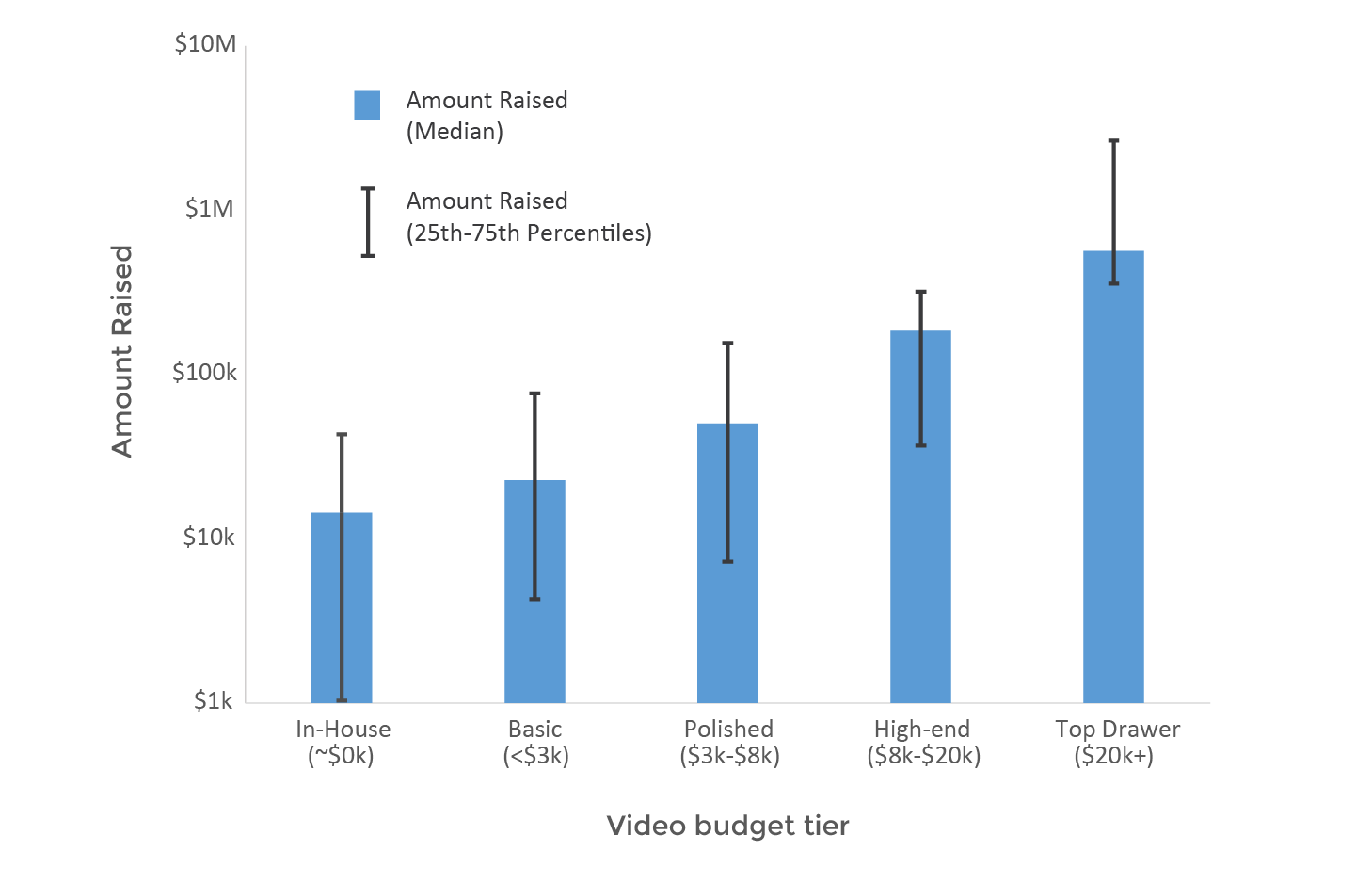 Here we can see even more clearly the correlation between video budget and the amount raised. But correlation does not imply causation – spending $20k on a video is not an automatic ticket to raising $1m. A more practical way to interpret the data is: if you plan on raising around $1m then be aware that most campaigns that have done that in the past have spent $10k+ on their video. So if you're planning on spending less than that you should be asking yourself, "what makes my circumstances different with respect to video?"

Now lets look at the relationship between video budget and success rate. 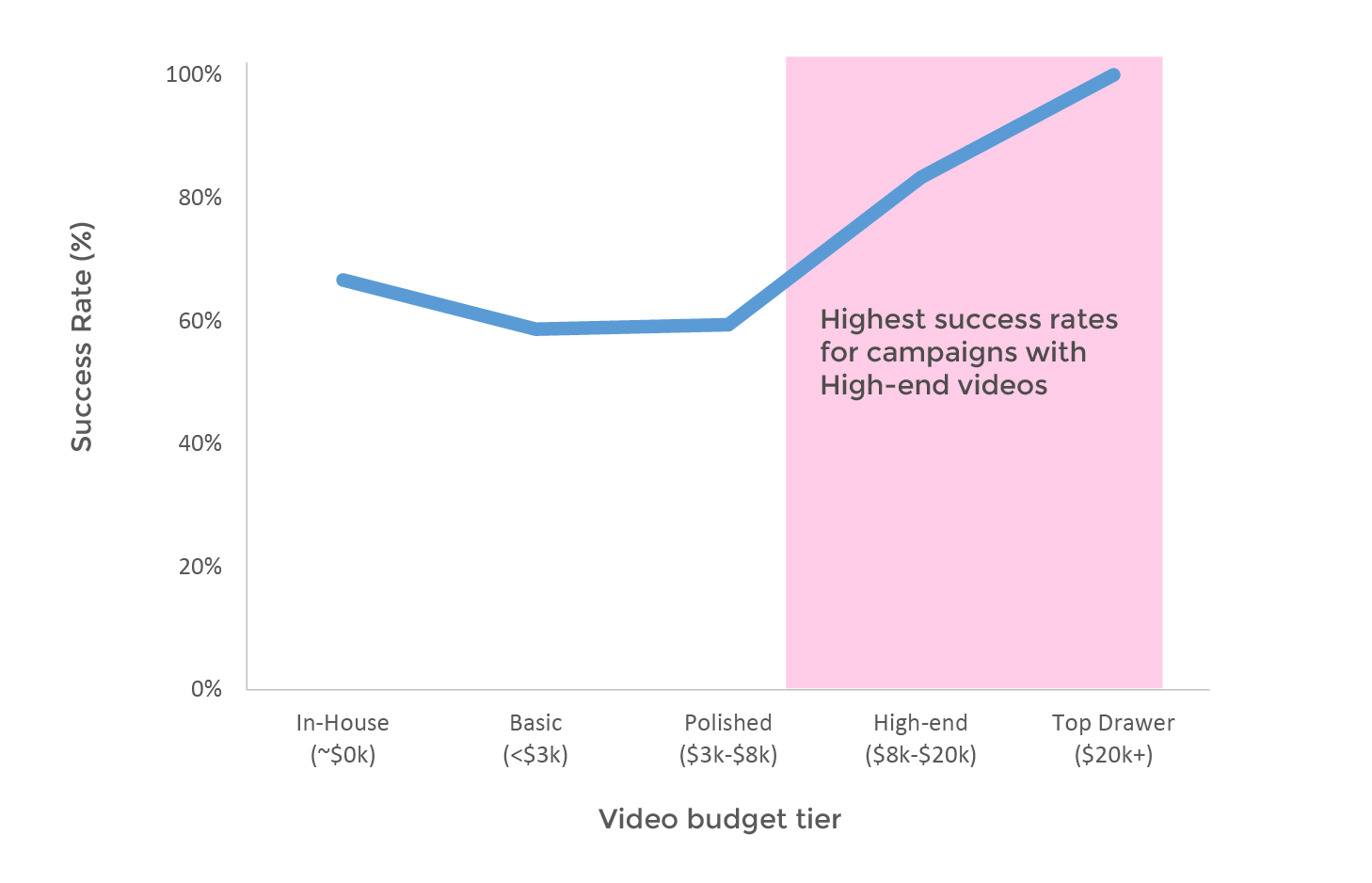 The patterns we clearly see is that campaigns with high-end videos are less likely to fail. That could be because a nice video inspires trust, at a time when backers are growing weary of crowdfunding busts. But more likely it's because bigger video budgets tend to be for projects that are further along in their development, that have received some market validation already, and that are able to offer more tangible higher-priced perks, thus having an easier time reaching funding goals.

Pulling all the video budget data together, here are a few takeaways to help you decide your budget: 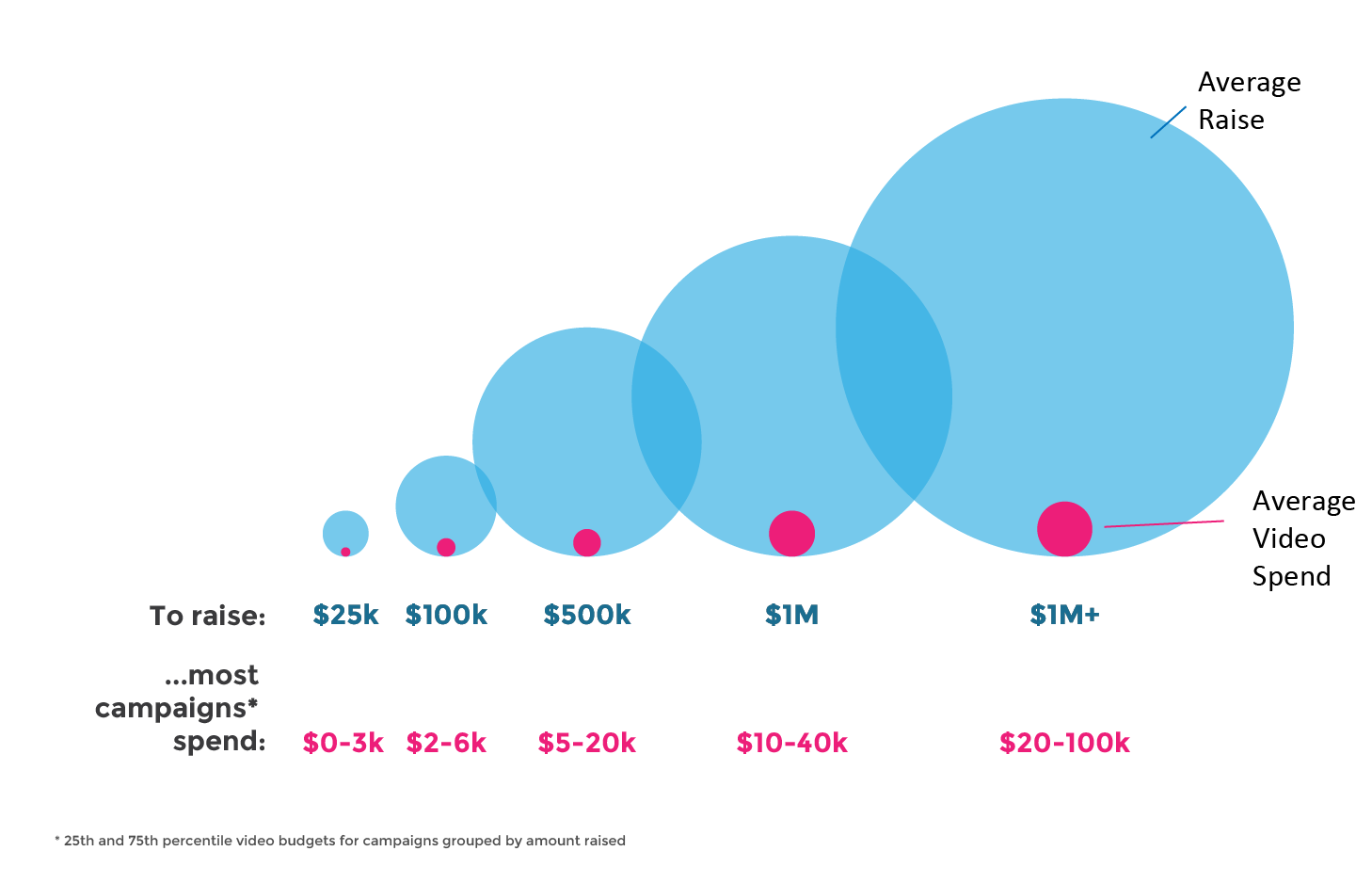 These are just guidelines, and you'll want to adjust based on the specifics of your campaign. For example you should probably spend above average if you have the sort of brand that can benefit from a glossier look, and a more complex production. Whereas you should probably spend less if your product is self-explanatory and you are able to take on more of the video production responsibilities yourself.

Length - How long should the video be?

There is a sweet spot in the 2:00 to 2:30min range. Videos in that range had the highest average success rate, and going a tad shorter or longer seems to make only a small difference. However we see significantly lower success rates for videos 4+ minutes long! 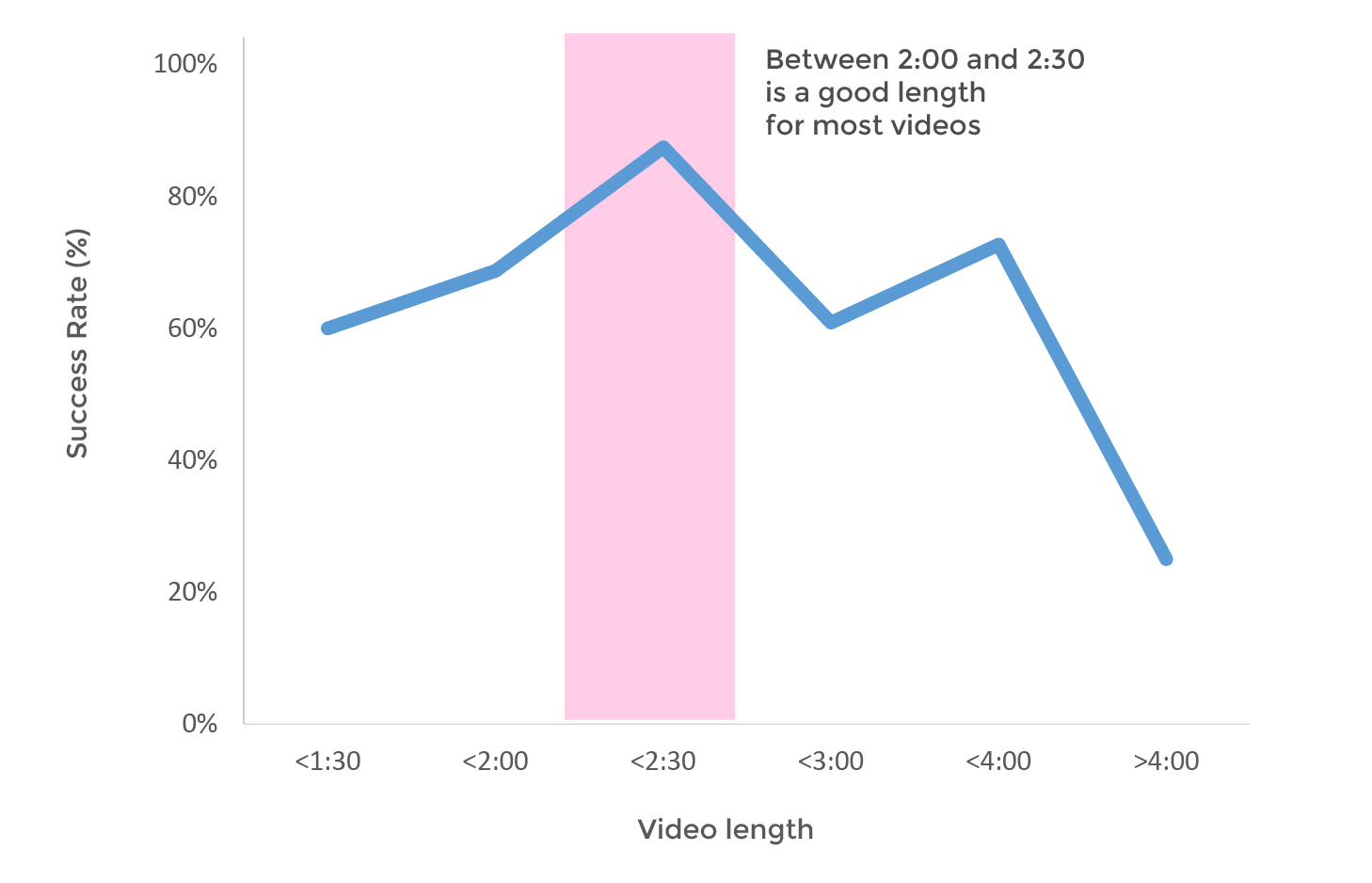 We found that longer videos (3-4min) can succeed just as well if they use the first minute of the video to talk about the product to capture the audience's attention, then use the later minutes to dive into the details (team, history, plan).

Introduction - When to reveal your product?

Some crowdfunding videos jump right in and reveal their product within a few seconds. Others first describe the problem first, and then show the product as the "solution". Deciding between a product-first and problem-first can feel arbitrary and subjective. 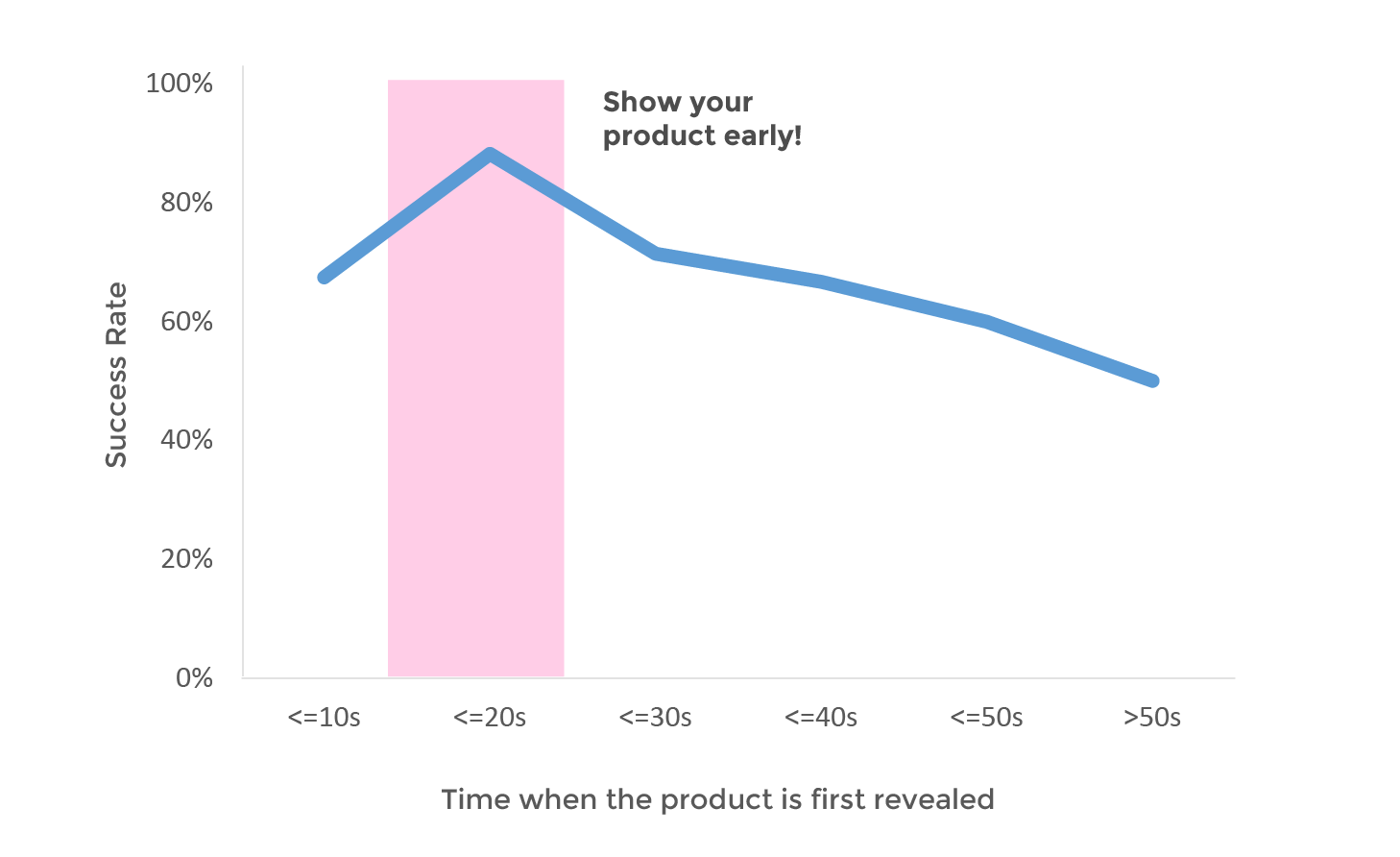 Videos that revealed the product between the 10s and the 20s marks achieved the highest success rate. They briefly showed us the problem (<10s is a quick setup) and then wasted no time in showing the product.

"Make sure you set up the problem, then show how your product is the solution. It sounds simple, but it is critical that the current problem and how you've solved it is clearly shown, otherwise people won't understand why they need your product." Ember, 500% funded, $360k

Mood - Which tone/mood should you aim for?

You may be wondering if your video should be Funny or Serious? Upbeat or Zen?... choosing the mood for the video can feel arbitrary and subjective. 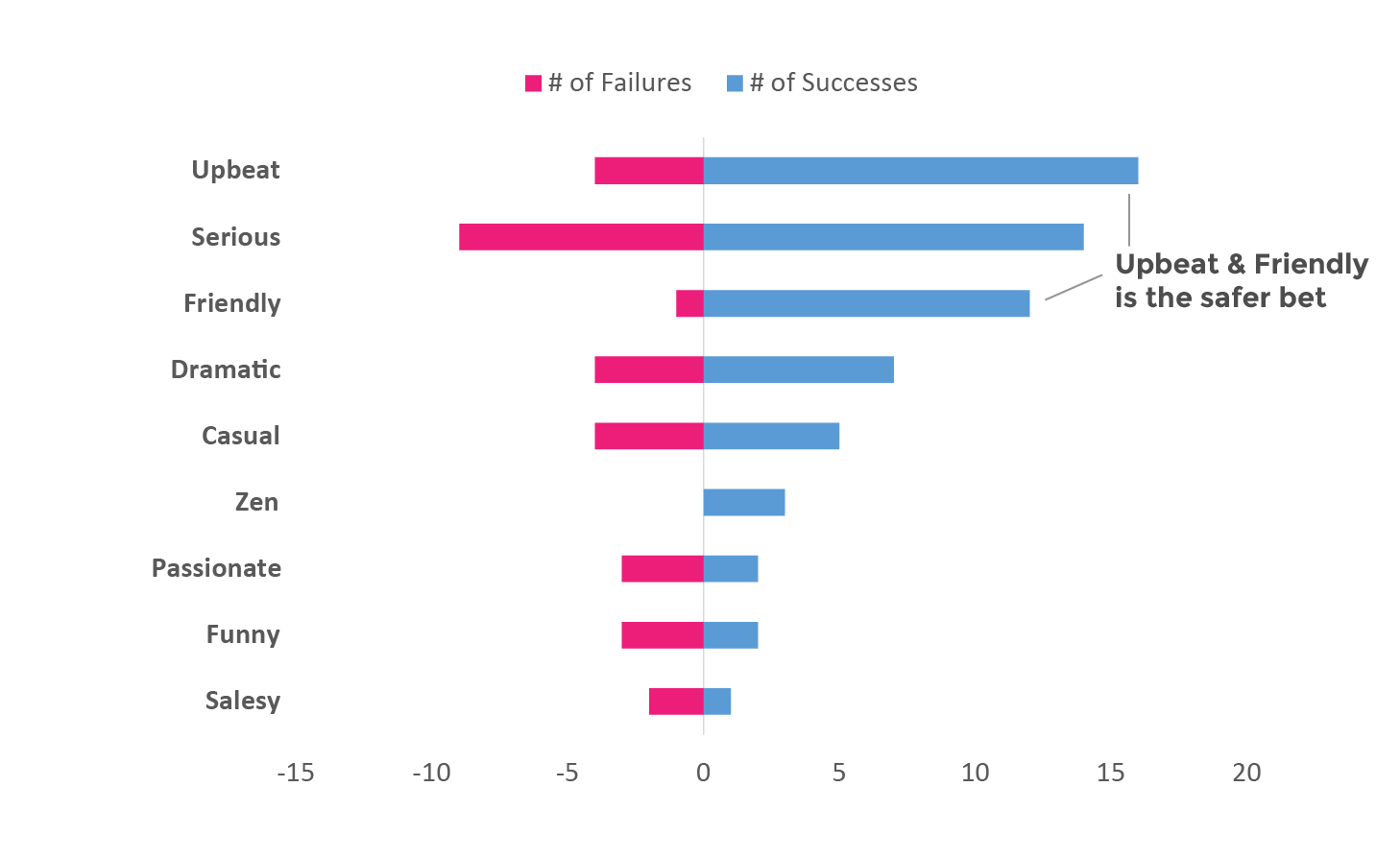 Production - How long does it take to make a good video?

We often get asked how long it takes to make a crowdfunding video: a week, a month, several months? The answer depends on the complexity of your production, but in general we advise to plan for at least a month. 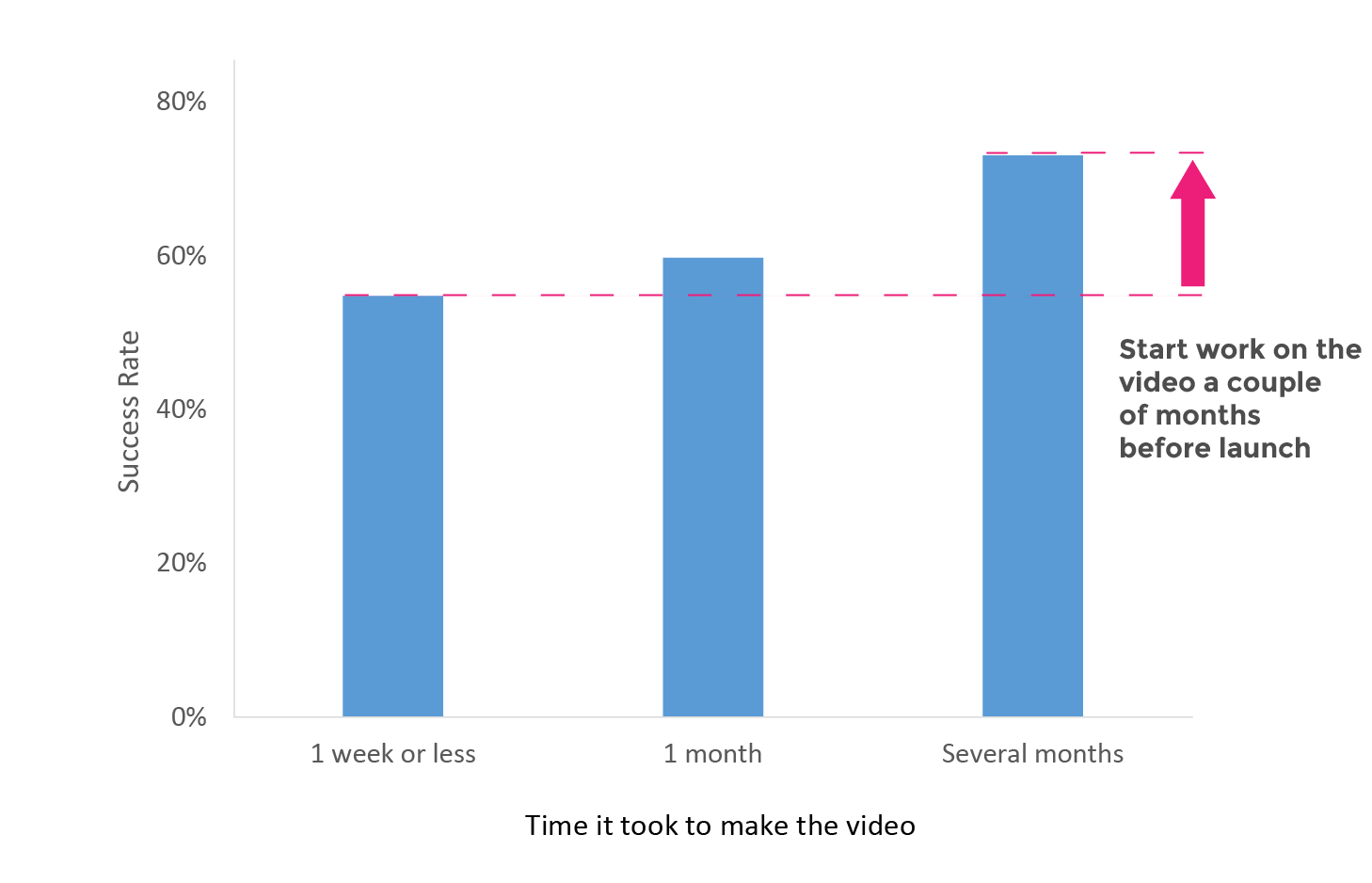 70% of successful campaigns worked on their video for at least a month, some 3-4 months. Campaigns that made their video in less than a week were 25% less likely to succeed, and raised much smaller amounts overall.

"Start production in 3 month before the launch, you'll be surprise how long sometimes it takes to make a nice video for your campaign" Atmotube, raised $250k+
"Do your homework so that on the day of shoot you do not miss any important shots (as that can be very expensive to redo)." TurboStool, 120% funded, raised $42k

Founder Presence - Do I really need to be on camera?

Do you feel shy in front of the camera? We have good news for you – you don't have to take a huge role in your video! 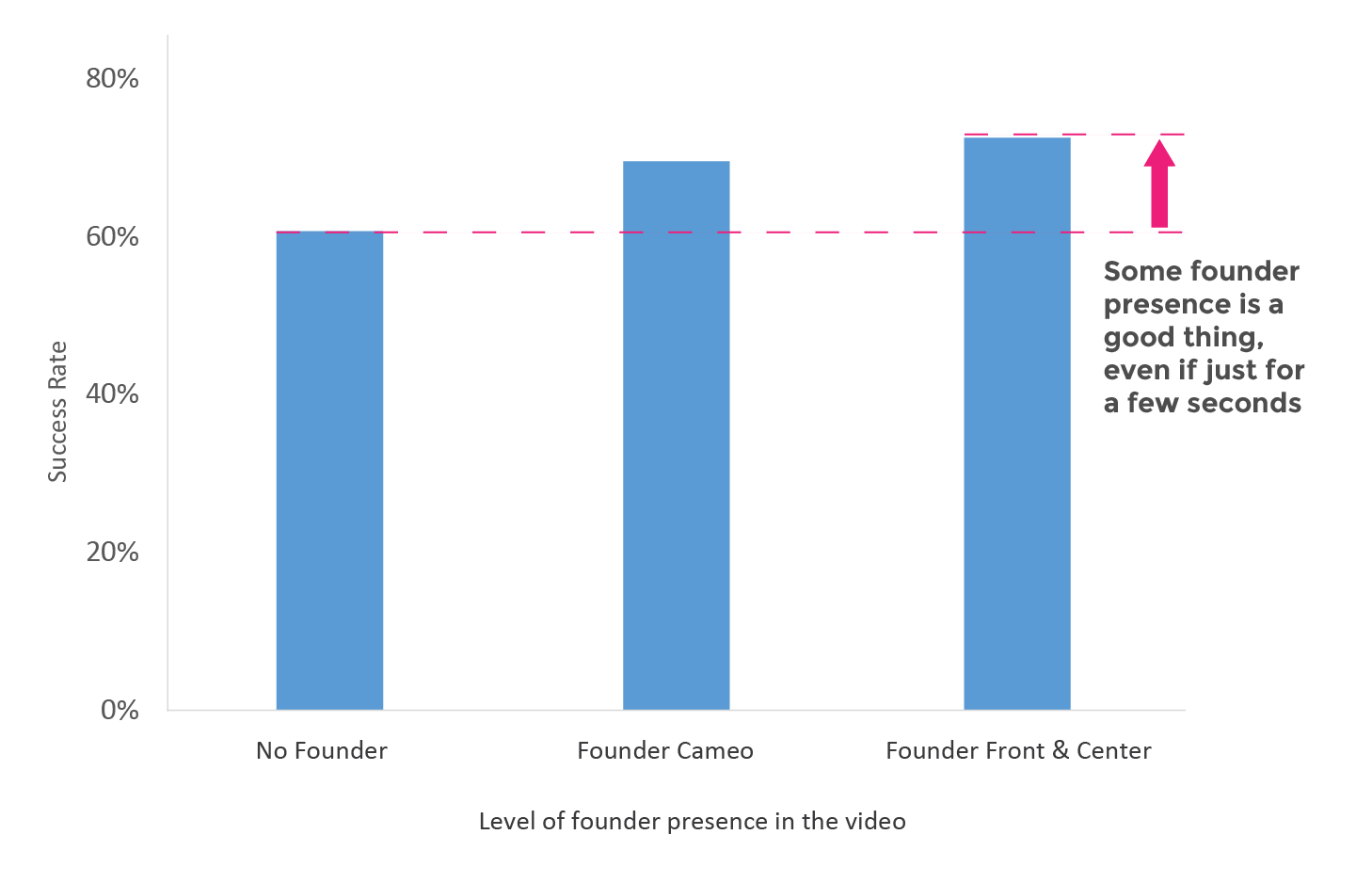 Some founder presence definitely helps, but you don't have to subject yourself to the dreaded "founder talking head" routine, nor make yourself the focal point of your campaign – not unless it truly adds to the video.

"There is a fight between personal and not personal videos aka from founders or from the 3rd person. From my perspective if you can act as a professional salesman and good in front of the camera - utilize it, if not - hire a spokesman for your campaign or use 3rd person approach." Atmotube, 330% funded, $240k

We saw only a small benefit from having the founders "front & center". Founders who make just a small cameo appearance still had high success rates. On the other hand videos without any founder presence performed poorly, probably due to the lack of authenticity.

Bottom-line, make sure you design your video with viewer engagement in mind. Authenticity is important, but there more engaging ways to be authentic than to subject your viewers to long – possibly boring – founder monologues.

Narration - who should narrate your video?

The most important learning here is that there needs to be a narrator! Videos without voice had a much lower success rate on average. 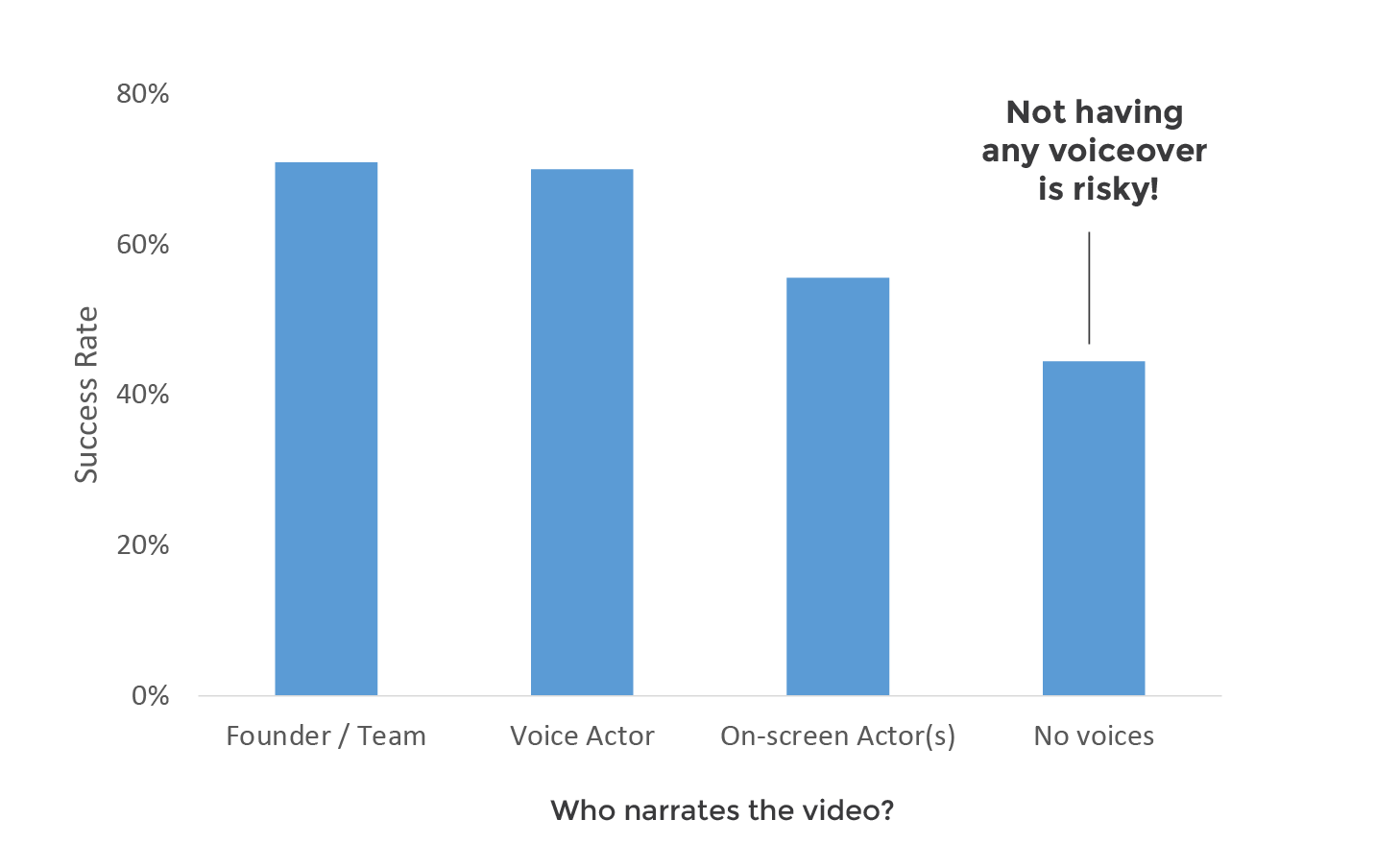 The voiceover can be recorded by anyone: founders, team members, or voice actors. It doesn't make a huge difference. This is good to know for teams who dont speak English as a first language. Don't hesitate to hire a voice actor if it helps comprehension, just so long as they don't sound like a radio commercial for a used car!

"Make sure to pick right voice-over for the video" MagicStick, 994% funded, raised $545k

Hiring outside help - Should we make the video in-house or hire pros?

We found that the majority of campaigns hired outside help to make their videos. Those who made the video in-house had a solid success rate, but the amount they raised didnt exceed $100k, and they tended to have prior experience producing video. 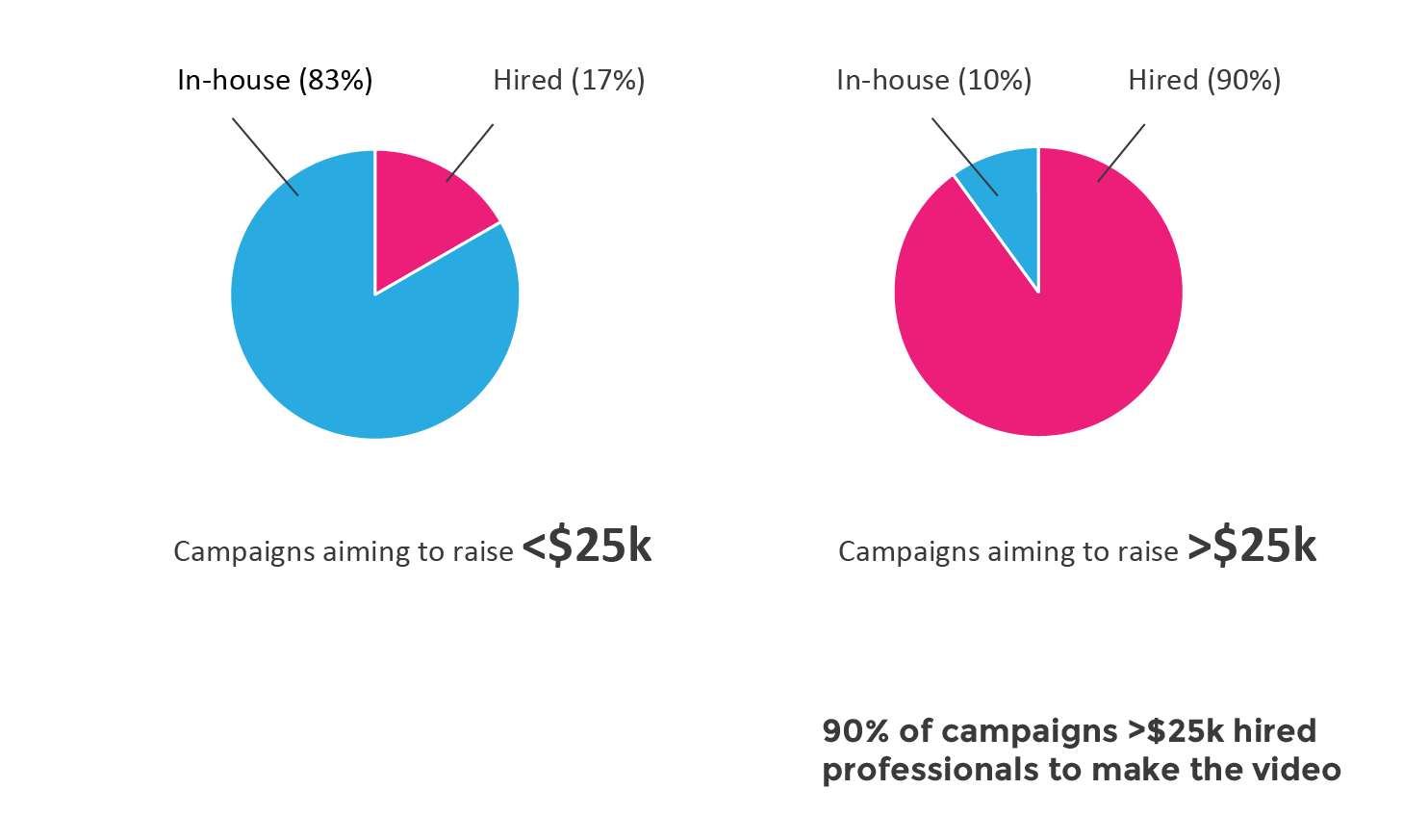 If you plan to follow in the footsteps of other large successful campaigns then you should almost certainly seek outside help. We heard that over and over from the founders in our survey:

Location - Where to film?

Location attractiveness plays a huge role – more than we had expected. Regardless of your budget make sure you spend time finding an interesting stage. Avoid dull office spaces and bare-bone dorm rooms. 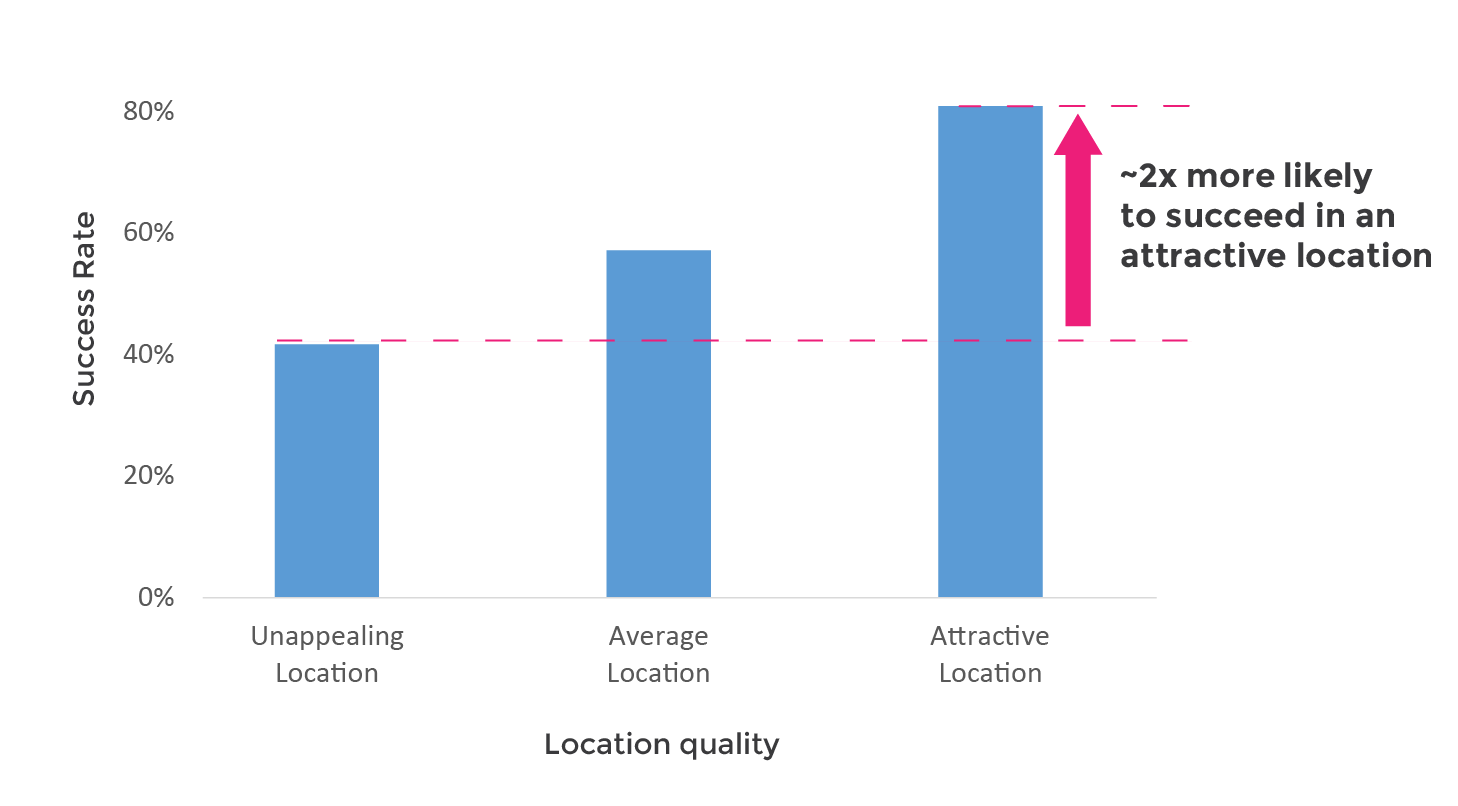 Your surroundings reflect the perceived quality of your product just as much as the looks of the product itself. Use the backdrops to set the mood/energy of your campaign. 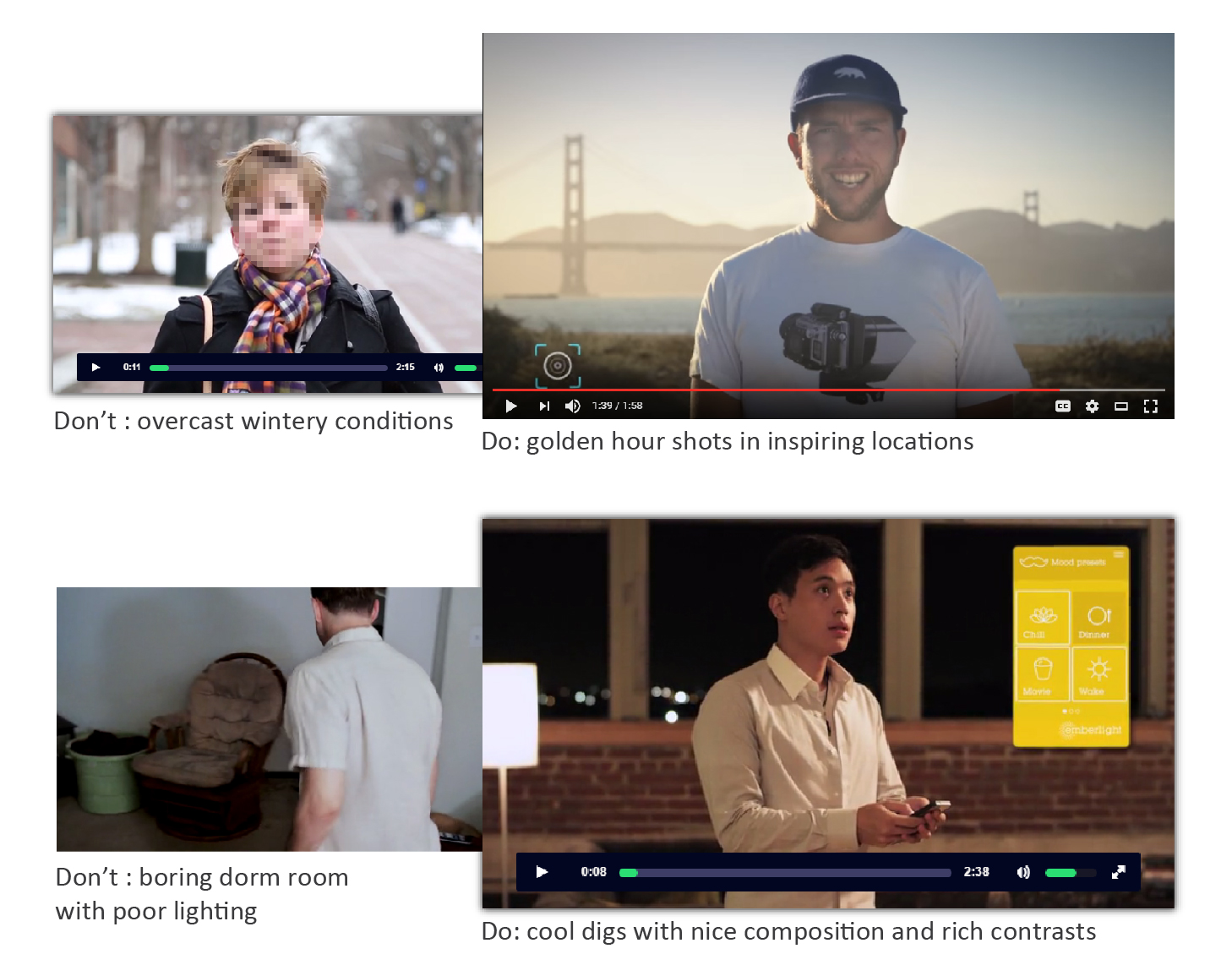 Lets look at the relationship between image quality and success rate. 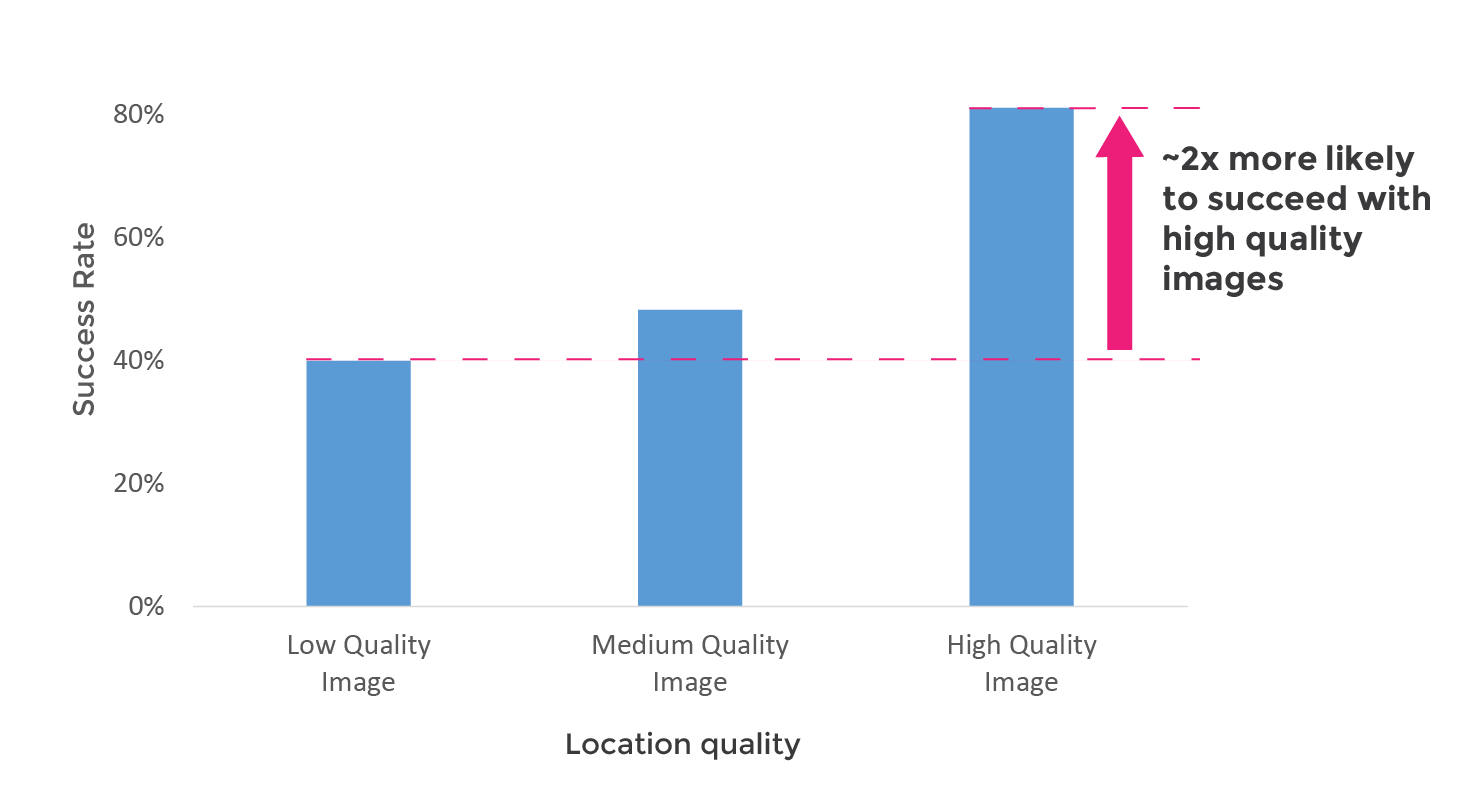 We found a 2x difference in success rates for campaigns with higher quality images! This is unlikely to be entirely causal, and it's likely that the video budget is a 3rd hidden variable at play here. But given the relative ease of capturing good visuals, why take the risk? Make it a requirement that the shots are are well lit, steady, focused and with appropriate depth of field.

You don't necessarily need high-end equipment: an entry level DSLR, a basic 3-point lighting kit and some practice will get you far:

"Good lighting goes a long way and can make up somewhat for a crappy camera. You don't need crazy expensive software to do video editing. Many people can get away with free or very cheap software to get it done. Photoshop is only $20 a month now. Audacity is free. I can't say I really liked my video. I would say it was a solid B- " SmartPi, 59k, 492% funded

Finally we have good news for those who did want to geek out and invest in fancy video accessories. You are validated! We found that videos that made use of glidecams and/or sliders to add camera movement did better on average! 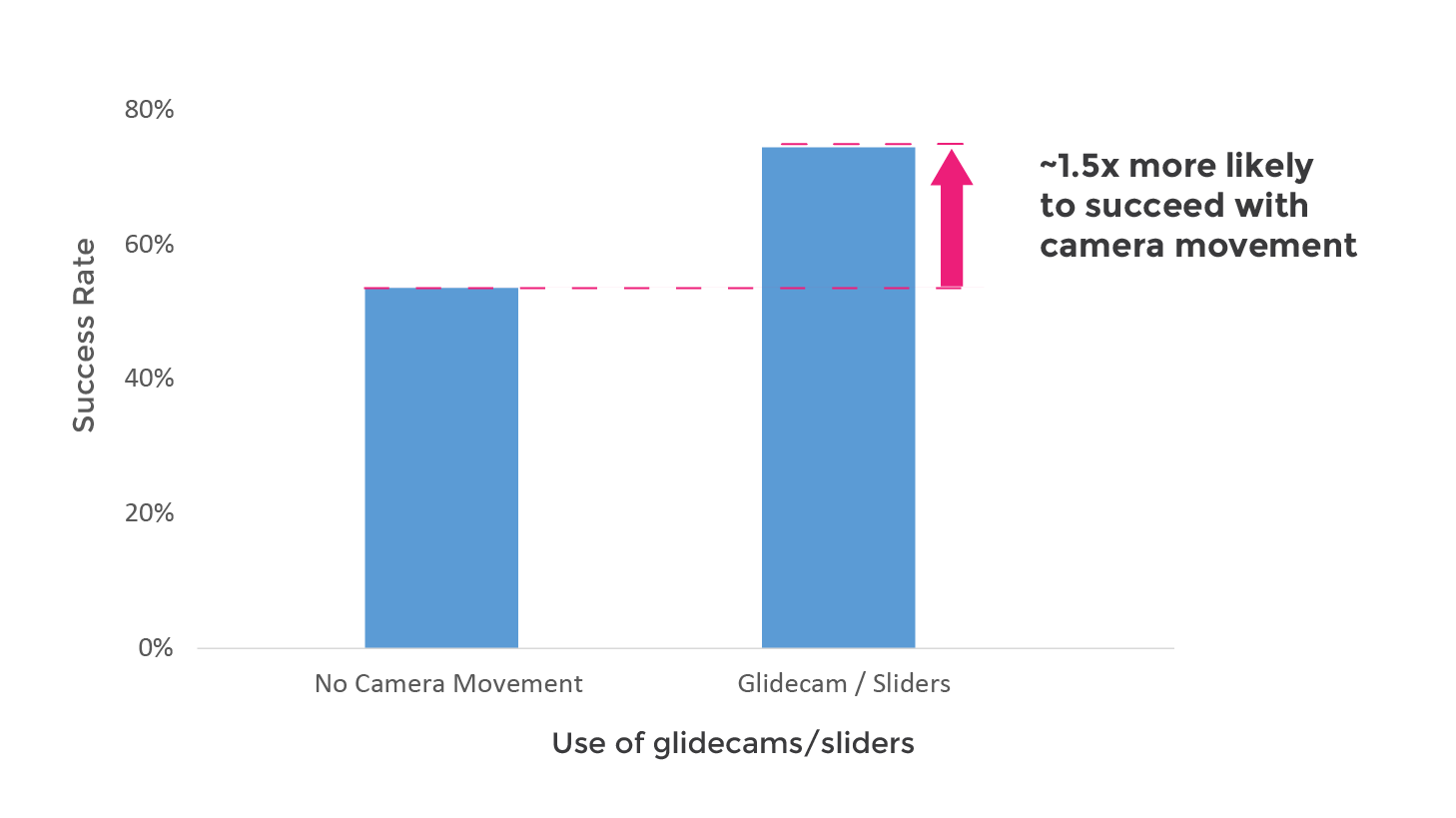 This was our 2016 Videopixie Crowdfunding Video Benchmark! We hope the data helps you decide on your video's budget, length, voice, mood, locations and more. If you have video design questions or suggestions please let us know in the comments or email me thomas@videopixie.com - we have plenty more data and opinions to share. Also check out: The 7 secrets of great crowdfunding videos for more tips, and this selection of the best Kickstarter/Indiegogo videos to spark your imagination.

About our sample: We want to thank the 100 campaigns that participated in the survey and shared their video secrets with us. The campaigns are recent 2016 tech hardware campaigns. One third were randomly selected from Indiegogo and Kickstarter listings. Another third made their videos with a creator on Videopixie. The remaining were targeted specifically to cover the full range of campaign sizes.