Intro ideas for your Kickstarter video

By Palmer Stanfield (creator on Videopixie) 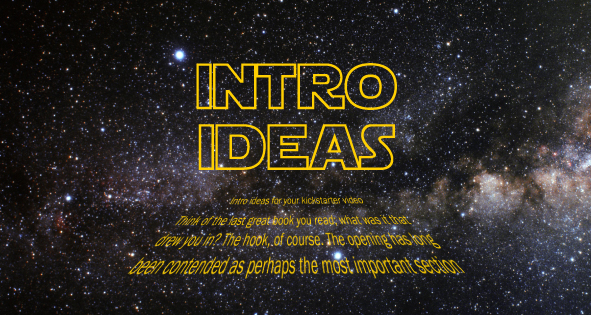 Think of the last great book you read; what was it that drew you in? The hook, of course. The opening has long been contended as perhaps the most important section of any widely popular work of art. After all, without a strong intro, what incentive does the audience have to stick around for the duration of the work?

It’s the same thing with your Kickstarter campaign video. Start off strong, and you’ll go a long way towards connecting with potential backers. Start off on the wrong foot, and you’ve lost your one and only chance to make a good first impression. So let’s take a look at some strategies to ensure that your opening is an invigorating one, shall we?

All too many Kickstarter videos start off in the same exact manner; slow fade in, on the face of the project creator, sitting dead-center in the frame, prepping you for three minutes of their droning on and on about how useful their product is, or how their next feature film will revolutionize the genre.

But what if instead, we launch straight into the good stuff, with some slick editing, a rollicking soundtrack, and the core idea behind the whole project? The successful Kickstarter campaign video for the Ouya is a prime example of this, showing us how we can get viewers immediately engaged and excited about whatever it is we’re pitching.

Another reason why Kickstarter pitch videos often drag, is their incredible sense of dryness. Even if what you’re selling is something you’re incredibly passionate about, it doesn’t hurt to take a step back sometimes and look at the humorous side of things. After all, what better way to make your audience like you (and want to stick around till the end of the video) than by tickling their funny bone?

LeVar Burton leverages a recent appearance on the NBC series Community in his successful campaign video to reignite the Reading Rainbow franchise, reminding us all why we were so drawn to him and the brand in the first place. This is a fantastic example of how to keep things light, and keep us, the audience, interested.

If all else fails, call in the pros; a well-shot product video is sometimes all you really need to sell your potential backers on the idea that what you’ve created is something they can’t live without. Make it big, make it shiny, and make it clear that what you’re doing is something special. Film it like it’s the next big thing from Apple or Samsung, and everyone will be chomping at the bit to get their hands on one.

This successful campaign video behind the Lumio lamp concept is a beauty to look at; a feast for the eyes, that manages in one fell swoop to convince everyone I’ve shown it to that the Lumio is a product worth having in their homes...even if a magnetized desk lamp was never on their wish list beforehand.

Lastly, if you’re raising money for something near and dear to your heart, it may be in your best interests to take the emotional route. By opening honestly and earnestly, you’ll tug at a few heart strings, and people will be immediately more invested in what you have to say, simply by nature of being human.

The above successful campaign video behind the Fortified Bike Light is a great example of this tear-jerking tactic. The story they tell makes us quickly realize the need for theft resistant bike lights; something which may not have seemed at all obvious before.


The above are just three examples of how you can make an impactful opening to your Kickstarter video. But the truth is, only you know your concept well enough to decide which method is best suiting, or if the best method is something that hasn’t been done at all before. The key take away here is that whatever you do, give your audience something to latch onto in the opening moments. This is your moment in the spotlight. Throw convention out the window, and get creative!

Got any other ideas for creative openings that you’d like to share with the Videopixie community? Leave a comment down below, and if you need help putting together your own masterful opening, shoot us an email, or post a project and as always, thanks for reading!

How much does a Kickstarter video cost?